The Best You Can Buy! 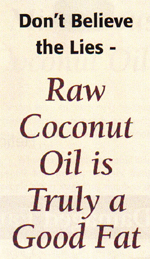 One of the healthiest oils for human nutrition, coconut oil was demonized to be a fat with detrimental consequences to one’s health. Lies about coconut oil took root, despite its long traditional as a safe and healthy staple in the tropical diets of natives for thousands of years. What happened? The answer is multifaceted, however the main cause of the demise of coconut oil was politics and economics.

Before 1980, coconut oil was popular in North American kitchens for the hot food preparations, baking cookies and making fabulous pie crusts. Coconut oil was safely used in restaurant deep fryers and even in many fast food restaurants. North American vegetable oil producing associations envied this huge business that was going to the tropics and wanted to see local farmers thrive by planting corn and soy as oil crops. Allied with the center for science in the public interest (CSPI), who emphatically condemned all saturated fats by applying faulty science, the corn products company and American soybean Association started negative publicity campaigns to persuade both the fast food industry and the general public that polyunsaturated oils were the better choice for frying. Today we know that this was a big mistake. When high heat is applied to oils. especially polysaturated fats such as sunflower, corn, flax and canola, damaged fat molecules are trans fats. Trans fats are damaging to the body when ingested. They increase the free radical damage that contributes to the development of degenerative diseases, such as cancer and heart disease. 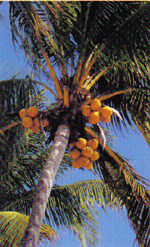 Interestingly, the hydrogenated coconut oil study that Enig cities as being so damaging to coconut oils reputation was done just in time for the seed-oil producers to use in their campaign to blame heart disease on saturated fats. What this study actually revealed is that once oils are manipulated and denatured even a naturally good fat can be turned into a bad fat. However, the seed-oil industry and CSPI reported the results in a slanted fashion, without taking into consideration that any modified, hydrogenated oil is dangerous.

Unfortunately, the poorer tropical oil industries of Indonesia, india and Philippines could not afford to counter the twisted science and negative propaganda spread by those in the United States in the late 1980’s. Their expensive campaign paid-off for decades. Many people sincerely interested good natural health had been deceived.

Don’t be deceived by the lies of the oil industry, invest in high quality, unprocessed, raw virgin and extra-virgin, coconut oil. The plant-based saturated fatty acid offers stability and health benefits and coconut oil also contains medium-chain triglycerides (MCTs), which have been rediscovered and documented by hundreds of studies as beneficial for maintaining good health.

The health benefits of coconut oil are numerous and possibly miraculous. Find out yourself.

Medium-chain Fatty Acids in a Nutshell 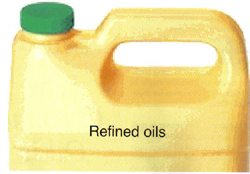 Finally, after decades of allowing dangerous, disease-causing trans-fats in processed foods, governments are now forcing food manufactures to eliminate them from products. But what about cheap oil, hydrogenated, processed oils and heat-damaged fats? These are transformed fat molecules and dangerous to health. Damaged Fat molecules behave much differently in the human body than natural fatty acids. Instead of acting like sparkplugs for fat metabolism, trans-fats act more like an ill-fitting ignition key, unable to generate the appropriate response. Worse than that, this ill-fitting key can actually break off and plug up the system, taxing the liver and preventing the body from absorbing good fat from good food sources.

Reaching for processed foods that state: “0 grams trans-fats” is no guarantee for good health either. Besides the fact that other cheap and damaged oils are being used in place of hydrogenated oils, food manufacturers are legally permitted to list trans fat content as “0” as long as there is less than 0.5 grams of trans fats per serving.

The late Dr. Horrobin, a pioneer in fatty acid research, used to say that even the slightest trace of trans fats, more than anything else, would block the conversion of Linolenic acid to PGEI. Linolenic acid is a fatty acid that is essential to our health, and PGEI is a type of prostaglandin, a hormone-like substance. We need the PGEI to protect us from lowered immunity, inflammation, high blood pressure, blood clotting and many other factors that in certain cases cause and contribute to disease.

Horrobin compared this conversation process with two sport teams, where one team would be strong(trans fats) that can’t be eliminated (by metabolism), the other one very fragile due to the absence of the defense.

Invest in high quality fat, such as unprocessed Virgin or Extra Virgin Coconut Oil, and also, if you’re not already doing so, prepare your meals from scratch. 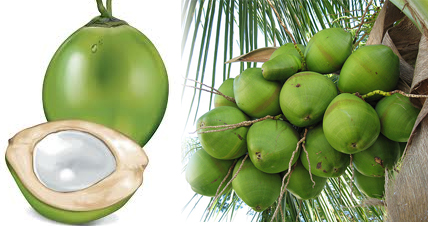 Virgin Coconut oil is a nourishing food and a healing medicine. Many knowledgeable experts now consider it so, but it was Dr. Bruce Fife who first coined coconut oil “the healthiest oil on Earth”, and he was right.

Natural and delicious, Virgin Coconut oil is extremely versatile and healthful in many different ways. As a food it is unique because itâ€™s composed almost entirely of medium-chain fatty acids (“MCTs”, for short) — the type of fat that is burned, not stored, in the body. This means that even though coconut is a saturated fat, it metabolizes very easily and will not increase cholesterol levels or plug-up arteries — that contributes to high blood pressure.

Virgin Coconut Oil is a lifesaver in the kitchen
Due to its heat resistant nature, coconut oil can be safely used for all hot food preparations. You can use coconut oil for frying, baking and cooking without fear that it will change into unhealthy trans-fats. Five-star chefs around the world swear by Virgin Coconut oil for sautéing.

In addition to being an excellent source of energy, Virgin Coconut oil has numerous healthy virtues, including antibiotic, antiviral and antifungal properties. This incredible oil can be applied to all kinds of external bacterial infections from cuts and burns to open wounds and can even help heal stomach ulcers when taken internally. Virgin Coconut Oil can even help to kill viral infections, such as the flu.

Whoever thought a fat could help people lose weight, however many people report staggering number of lost pounds when they changed their fat intake to include a majority of Virgin Coconut Oil.

For health benefits and great taste, your best choice is the highest quality Virgin Coconut Oil you can find. Choose a raw oil, produced by either centrifugation or a trade-marked expelling (DME). You will find your money is well spent in obtaining the healthiest oil on Earth.

Fat: how much do we need?

Of the 51 nutrients the human body requires for health, fat is surely the most misunderstood. With too little fat, the body could not make use of the fat-soluble vitamins A, D, E, and K. The membrane of each and every cell in the body is made up of fat, providing both structure and flexibility. Most of the human brain is made up of different types of fat, including phospholipids, saturated and monounsaturated. Without fat the body cannot make hormones or the neurotransmitters that allow for physiological communication.

There’s no doubt that the body needs more fat then most of us realize. Fat serves as an important back-up fuel to our glucose, which we receive from carbohydrates. A healthy man carries about 20% of his weight as storage fat. A healthy female carries approximately 25% storage fat. The body can even make some of its own fat. Most of the body’s stored fat is actually glucose that’s been converted to fat for storage. In the time of need, this conversion is reversed and that the fat becomes glucose again to be used for energy.

So, how much good fat do we need? A healthy adult requires an estimated 70 grams of fat daily, but  the quality of the fat is more important then the quantity. The fat should come from good, natural, undamaged sources — such as extra virgin coconut oil.

Coconut Oil — The Fat that Helps you lose Weight! 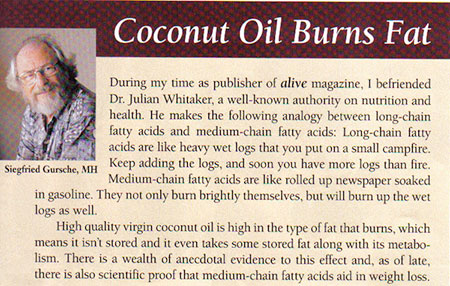 Obesity has been and still is on the rise. The numbers are alarming. According to the Canadian Obesity Network, more than 5.5 million Canadian adults are obese, as are approximately 50,000 children. This translates to one out of every five of us being at an increased risk for early disability and disease.

What’s to blame?
The medical world blames lack of exercise, insulin intolerance, fast food and  improper diet for the phenomena, which is true… in part. But they don’t point the special finger to two special culprits —refined carbohydrates and refined vegetable oils.

Livestock farmers and animal feed producers appear to know more about fat metabolism than our general practitioners and government-regulated dieticians. Those who deal with animals as a business have observed that if you feed animals oil seed, such as flax, grape or sunflower seed, they fatten up. However, if animals are fed coconuts they end up lean and healthy!

Scientists have known for quite some time now that the length of the fatty acids chains in food fats and oils make a big difference when it comes to gaining or losing weight. Long-Chain fatty acids promote weight gain. Meanwhile, our supermarket shelves are stocked with polyunsaturated vegetable oils, which are long-chain fatty acids (LCFs). These include canola, safflower and sunflower seed oil-most of which have been refined and, therefore, contain dangerous trans-fats.

Coconut oil is made up of medium-chain fatty acids (MCFAs), which beneficially increases metabolic rate, which in turn leads to weight loss. Bruce Fife, ND, PhD, has dedicated an entire book to this subject, Eat Fat, Look Thin – HealthWise, 2002. 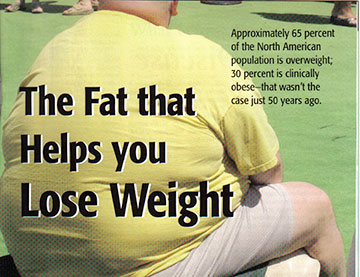 Dr. Fife recommends coconut oil before meals. The amount of weight people lose adopting this simple and health-prompting routine is truly amazing. In addition to speeding up metabolism, coconut oil curbs the appetite by providing the satisfaction that only a high quality fat can.

Again, if you compare the excellent state of health amongst indigenous people in the South Pacific during the time when coconuts provided the major part of fat intake with today’s situation where refined vegetable oils and Western food have reached the islands, you will find that all the degenerative diseases of the Western world, including obesity, have taken a foothold. I clearly remember the late Dr. Paavo Airola reporting a time when the medical school at the University of Manila in the Philippines had cadavers from the United States flown in so that the students could see for themselves what plugged-up arteries looked like. This condition did not exist in their own country!

Dr. Mercola calls coconut flour “The secret weapon to managing your weight”.  Coconut flour fits well into a weight-loss program because its high-fiber content helps provide bulk to a meal along with a feeling of satisfaction. In addition, fiber, for the most part, is not broken down or digested in human digestive tract, and therefore provides no calories. Studies have shown that consumption of 14 grams of fiber per day, which is equivalent to ¼ cup of coconut flour, is associated with a 10% decrease in calorie intake and a loss in body weight.

From Dr Jon J. Kabara, Emeritus Professor, Michigan State University, discoverer of the medicinal properties of monolaurin in coconut oil and author of FATS are Good for You, who stated: